A Call to Righteousness

“Just because a Christian won’t support something, doesn’t mean they hate the people who are involved in it.”It means that a Christian will not compromise his values because he loves God too much to bend for society’s sake, no matter how much pressure society places on a Christian to embrace wayward values. God has called us to live a life of righteousness, not lasciviousness!  We have brothers and sisters overseas who are being martyred daily for their faith. That’s true guts and standing up for what you believe in and the ultimate act of allegiance to Christ!

Don’t let society bully you by saying you’re a bigot and closed-minded because you won’t embrace their new laws that promote a new way of living that does not value righteousness.  God and God alone has the authority to instruct us on how to live our lives and what those parameters involve. I believe Reverand Billy Graham said it best when he declared, “You can be so open-minded that your brains fall out!” This is exactly what has happened in America. Deception, lawlessness, selfishness and greed have become so pervasive in our country that people have embraced an “Everything goes” philosophy. This is hogwash! 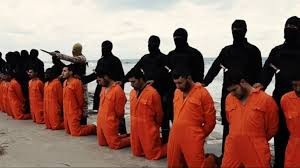 Christians Beheaded for their Faith

God gave us a Bible, His love letter to us, so we could have a standard to live by and so we could show the Lord our love for Him and for our neighbors. When society tries to re-write the Bible for us and dare to tell us that wrong is now right and right is now wrong by attempting to force us to embrace a liberal lifestyle at the expense of forsaking our religious values, they have gone too far!

34 Righteousness exalts a nation,
But sin is a reproach to any people.

As Christians, we will not give in to liberal theology, wayward living, high pressure politics, wayward educators, or false religion that dares to steal away our Christian heritage. As I mentioned earlier, our brothers and sisters are being beheaded overseas for standing up for their faith. Knowing this, we can certainly stand up against radical liberals who have the audacity to call us bad names or insult our intelligence by introducing a false gospel to us.

Remember that God has given us the greatest power available to us to battle the forces of evil–the Holy Spirit! So, rise up, my brothers and sisters, young and old alike. We are in this fight against evil together and we will shall prevail because the Bible says so! So, let us start living like the champions that God has called us to be rather than cowering down to fear or evil.

37 Yet in all these things we are more than conquerors through Him who loved us.

17 No weapon formed against you shall prosper,
And every tongue which rises against you in judgment
You shall condemn.
This is the heritage of the servants of the Lord,
And their righteousness is from Me,”
Says the Lord.

This entry was posted in Uncategorized. Bookmark the permalink.

15,466 Responses to A Call to Righteousness